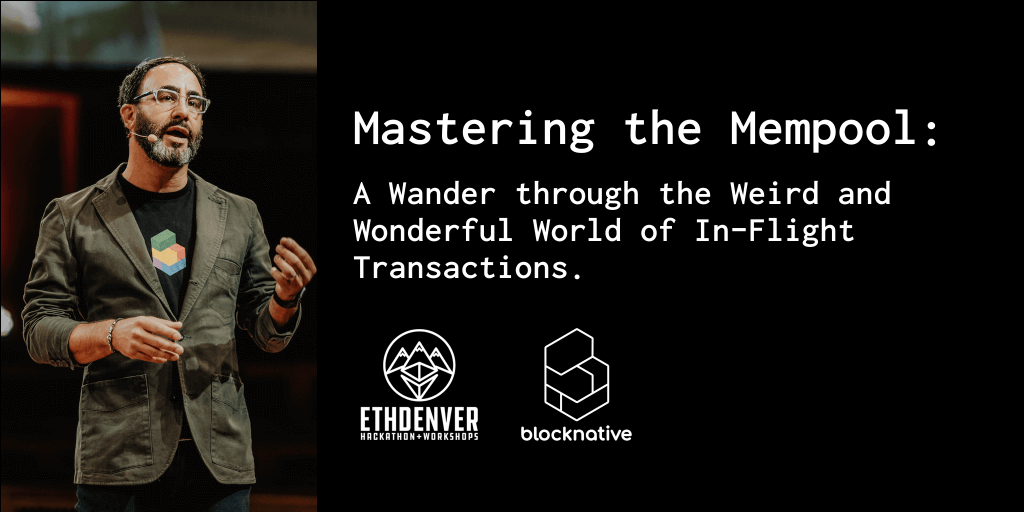 8 Lessons to Help You Master the Mempool

By Blocknative in blockchain, ETHDenver, Mastering The Mempool, Mempool, Ethereum on March 31, 2020


We want to wish the entire community well during the COVID-19 pandemic. While things are turbulent right now, we wanted to share a new post that dives deep into the mempool so that you can dig into an important part of the Web3 ecosystem.

To date, the industry has largely focused on value-at-rest. This is an important piece of the Web3 puzzle. But for any transaction to be included in a block, it must move through the mempool. And unlike the blockchain — which acts as a definitive record — the mempool is chaotic, fragmented, and often unpredictable.

In the course of building infrastructure to monitor the mempool, we've learned a lot about how it works. And at ETHDenver 2020 Matt Cutler, Blocknative's CEO and co-founder, shared some important lessons in his talk Mastering the Mempool:

We've distilled the session into actionable lessons that we believe everyone building in Web3 should know. Let's dive in!

Experienced builders have been grappling with the complexity of the mempool for some time. Given the structure of the mempool, a number of interesting problems arise:

While blockchains act as a single source of truth, mempools have no intrinsic form of ensuring consensus. Organizing this chaos into developer-friendly pre-chain data requires substantial resources and expertise.

When you transact on Web3, you have to hand your transaction over to the network and hope it arrives in a block. Much like checking luggage at the airport. 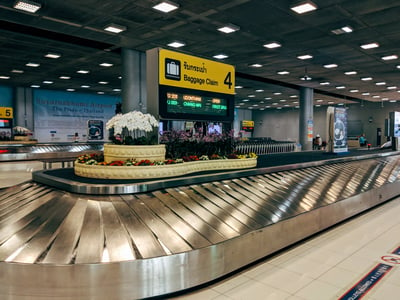 The node that receives your transaction broadcasts it out — and you wait for it to get confirmed. If your transaction gets stuck or lost, no central authority can tell you what's going on – or help you resolve the situation.

Given the state of Web3 — and how transactions get validated — transacting creates anxiety. And this anxiety is not felt just by new users. Experienced users, who are more likely to be transacting with real value, often experience the most pronounced transaction anxiety. 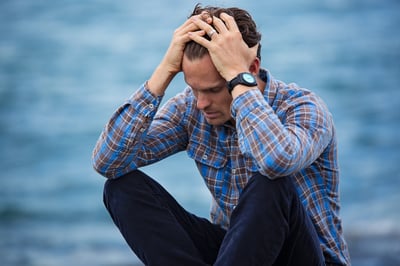 This anxiety is problematic for our ecosystem. And end-users generally do not engage with systems that induce anxiety.

3. On-Chain is Value at Rest

As a community, we spend most of our time talking about value on-chain. And by definition, all on-chain value is at rest. Conversely, the mempool is always in motion.

This is important because the inner workings of the mempool is not widely understood. And a working knowledge of mempool operations is key to understanding how every transaction comes to rest on-chain.

4. Even Base Terminology is Subject to Debate

Blocknative defines the mempool as:

The shared staging area 'in front' of a blockchain that enables transaction ordering, transaction fee prioritization, and general block construction."

Think of this as the “waiting area” for transactions to be accepted into a block. But depending where you sit in the broader blockchain ecosystem, you might use a different label:

Given this, we prefer to use the generic 'Mempool' label for purposes of clarity and inclusiveness.

5. There is No Such Thing as "The" Mempool 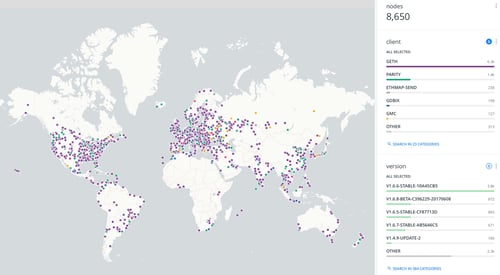 A View of The Global Mempool Landscape. Source: matallo.carto.com

The composition of transactions inside of a node's mempool is driven by a number of factors:

These factors all play a role in determining which transactions enter and persist within a node's mempool.

The default configuration (slots and memory) settings for Geth and Parity mempools dictate much of their behaviors.

If all of the slots in a node are full, when a new pending transaction is accepted to the mempool, the transaction with the lowest gas fee will be dropped. Different nodes with different settings will accept and drop different transactions at different rates. 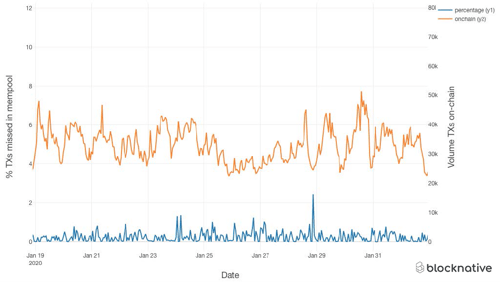 In our analysis, a single node's mempool in a single geography will miss ~1% of all transactions during normal operating conditions. Under heavy transaction volumes, the percentage of missed transactions can vary greatly.

8. Everything in the Mempool Can Be Replaced 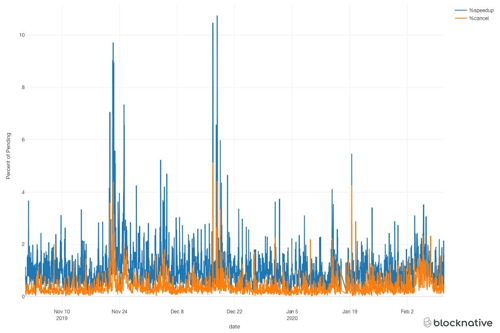 During his talk, Matt dives deep into the messy reality of Ethereum transactions. And builders who want to learn more should watch the recording in its entirety or check out the Mastering The Mempool Blog Series.

How to Build with Mempool Data

Notify is a powerful framework that enables developers to access a global node network that captures and organizes the mempool in real-time. Developers can access Notify as an API, SDK, or JS library. This real-time notification network is trusted by over 40 teams in production.

Rather than expecting users to pull data and refresh for updates, your application can leverage the Notify API to push information and let them know what is going on in their transactions. You can see an example of live push notifications in Pillar and Eidoo — both of which alert users of both incoming and outgoing transactions. This feedback loop reduces anxiety for users and helps them to take action when something goes wrong with their transaction.

DeFi protocols can use mempool data to understand how long transactions take on their protocol as compared to other leading protocols. The reality is that many protocols have no insight into transaction times (either the average or when things start breaking). And performance here matters.

An Example Of Building With Mempool Data

Aside from Matt's talk at ETH Denver, we were excited to see the developer ecosystem dig deep into using Notify to build next-generation applications.

And coming out of the hackathon, we were excited by one project in particular — OutFront, a service that monitors pending transactions for unauthorized transfers of ERC20 tokens from wallets and fires off a competing transaction at a higher gas price to divert funds into a rescue wallet. The non-custodial system uses a signed permission token (EIP712) to execute the recovery. 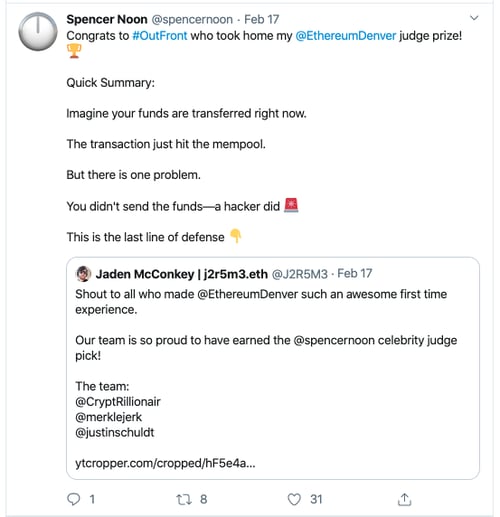 Aside from the obvious excitement of seeing a team building with Blocknative present on ETH Denver’s mainstage, we were thrilled to see that the conversation around the complexity of the mempool and the opportunities that pre-chain data can provide. 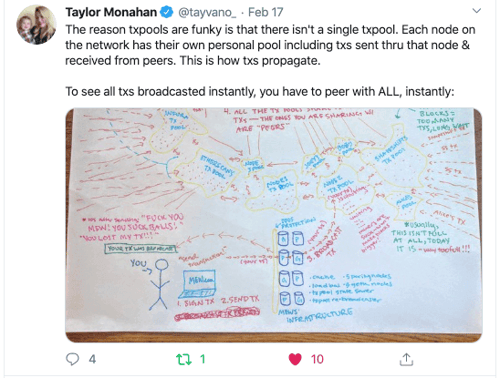 The complexity of the mempool has previously prevented teams from building on it.  But now, with Blocknative’s API and SDK, developers can access the rich world of value in motion. And in that world, they can see all of the possible future states of the blockchain.

This creates a chaotic, ever-changing mempool data environment. As we drive towards 1 billion transactions, it is crucial for our ecosystem to leverage mempool data to improve end-user experience and create more robust experiences.